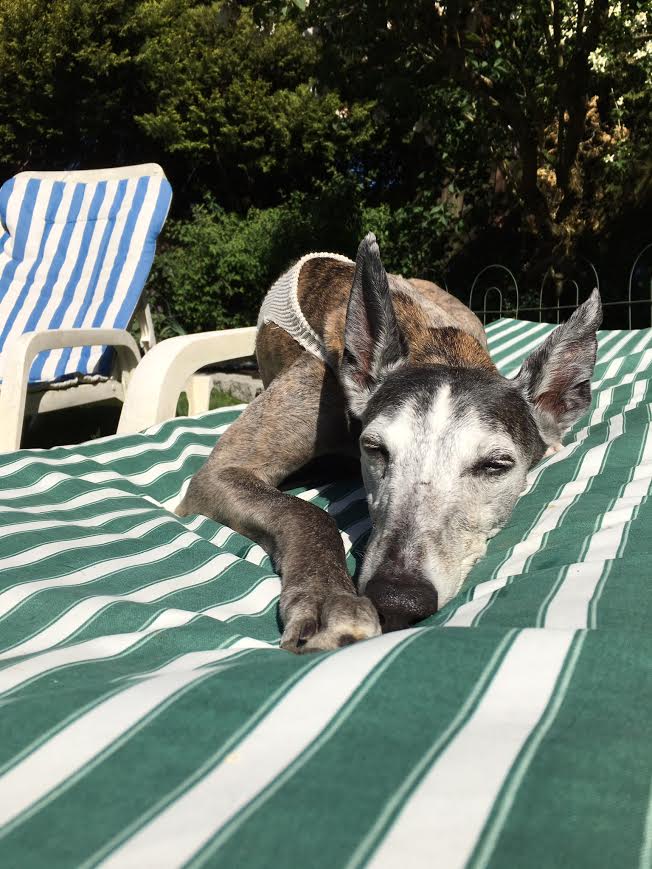 Loss is so hard and opening our hearts again can seem impossible. A very special client at Cascade Heights Veterinary Center wrote the post below in response to numerous friends losing their four-legged family members to osteosarcoma and their fear they will never be able to love like that again. Relaena’s companion Emma was diagnosed with osteosarcoma earlier this year. Thank you for these beautiful words. — Dr. Paulson

I’ve grieved a lot of dogs (and cats, and a horse) in my life.

I used to think that grieving was… well, it was this “state” that you went into.

And a part of your heart just pretty much always stayed there, because death was permanent.

You just had to find a way to accept the “new normal” and keep breathing.

I wrote an article about this for one of our local dog magazines… the journey of grief.

But even the word “journey” can be misleading, because there’s no “point A to point B” about this journey at all.

In fact, grief has been different for me, every time.

Granted, each animal we take into our hearts is different. We all know that much. And the relationship we have with each animal is different… I have two dogs in my home and I love them both dearly, and the love is different for each one. (Words don’t work well here, that makes it sound like it’s a measurement thing, and it’s not… it’s a feeling thing… the way one apple can taste different from another).

So once you think about it that way, it’s not too much of a stretch to believe that grief will be a bit different each time.

But when those special ones come along… those that seem to go deeper into our hearts than others, losing them is extra hard. Choking, gasping, messy, terrible hard.

And somewhere in your heart, there’s a tendency to say “that’s it, there will never be another like him/her, my heart can’t possibly open up again like that.” You struggle to accept the lack.

The first time I had one of those “special” dogs, I thought… no, I knew… that my heart had reached “maximum pinnacle” for love and connection with a dog.

So I knew I would not be getting another dog… because all I would do was compare / be sad / never give that new dog a chance.

And it hurt like hell and I slowly came to just accept the hurt.

I figured that was the price for having had such a special soul in my home and heart.

At the same time however…. we still had another dog in our home, who was clearly feeling lost and alone.

So after a lot of thought, and some months of time had gone by, we decided we should at least foster some dogs “for George” (the lonely dog). Because what the heck, we have a good home, we give very good care to the dogs in our home, and best of all, we won’t get attached to the fosters because our hearts will never attach like that again.

Fostering felt safe and good to do.

We fostered for the better part of a year for two different rescue groups… I don’t know how many dogs. Different breeds. Different stories. Different smiles. We were great foster parents. Doing the right thing, no connection required. Check.

The day before Christmas, we picked up our next foster dog. And what a mess she was. She was on death row and we were her last chance. They told us she’d been a great dog once. But something had happened with her last family, and now she was scared and angry and snarling and attacking. George was cowering. It didn’t look good. When we tried to give her back, they told us she’d be put down if we did.

Anyway. I could write a whole ‘nuther story about what happened in the next few months, but… suffice to say, she started to open up to me, and in the weeks and months that followed, started to trust again, so I did my best to work with her and train her and prepare her for being adopted.

One day about six months later, a dear friend of mine looked at me and said, “are you kidding me? you’re taking her to an adoption event? she loves you like no dog I’ve ever seen.”

And that’s when I realized, I’d been exerting so much energy to keep my heart closed and shuttered like a broken window, “doing right by this foster dog,” that when I opened up the shutter, and a beam of that dog’s “sunshine” came through, I suddenly saw how special she was.

She and I fell madly in love with each other. (I feel reasonably safe saying that to a group of dog lovers, although some of my friends look at me like I’m a nut job, hehe).

And the weirdest thing was… in those early months of realizing that I loved her, it was like there were two completely opposite rooms in my heart. One was dark and echoing and sad and grieving still. The other had this new beam of sunshine scattering the dust, and it felt alive and warm and….. very very special.

How could grief like that live next to love like that? The heart is a strange thing.

Her name was Duchess. She was an old soul and a wise woman and an incredible heart. She was also my first dog with bone cancer.

And seven years later, when I breathed in her last breath to my heart, and breathed out my breath into her last breath, I knew… I KNEW… I would never, ever feel like that again.

THAT was indeed “the pinnacle.”

And for four years, I was right. My heart literally could not “see” any other dogs during that time.

Until a little independent punk of a Greyhound girl named Emma came into my life. (This email’s long enough so I’ll spare you the “how” story.)

Fast forward, I’ve had seven amazing years with this girl who… just like when Duchess came into my heart, found her own “room,” opened up the shutters, and cleared out the dust. She is nothing like Duchess. She is nothing like my other “heart dog” who I previously thought was the pinnacle of love. But… she is every bit as special as they were. And they are no less special because of her.

So I have this new theory: our hearts have more rooms than you can believe. Dogs are here to open up as many rooms in our hearts as possible. Never say never.

With love and tenderness for each of your hurting hearts,

Relaena and Emma the greyhound

–The picture above is Emma a few days after leaving the hospital post surgery. In true greyhound fashion she opted for and jumped (on her own) to the recliner for some sun bathing instead of choosing the plush dog pillows on the ground. Classic Greyhound…comfort rules —

Font Resize
Contrast
Accessibility by WAH
Call Us Email Us