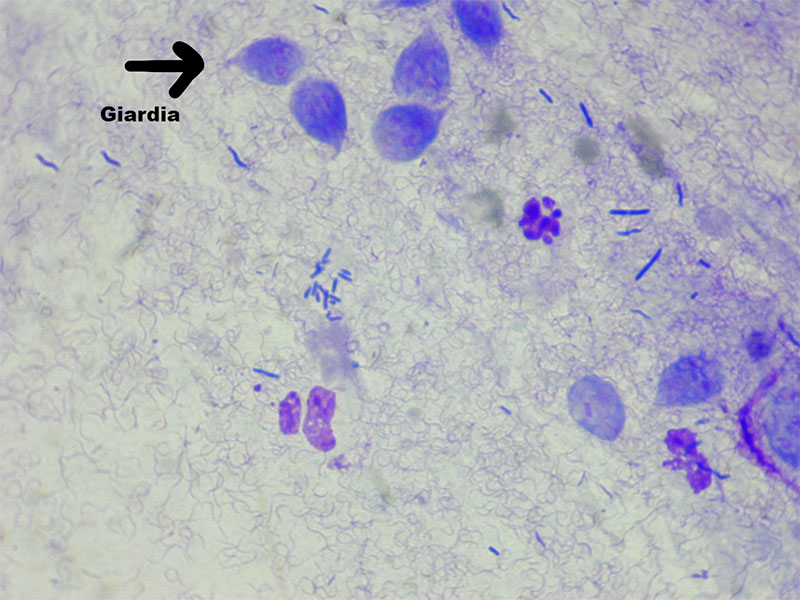 A recent thread about Giardia on NextDoor.com had multiple dog owners chiming in with a range of questions, first-hand experience, and advice. Given how prevalent this parasite is in the Pacific NorthWET, we thought it was high time we wrote an article about it.

Giardia is a microscopic protozoan parasite that can be found on surfaces, in soil, in food, or in water that has been contaminated with feces (poop) from infected humans or animals.

Giardia thrives best in cool, damp environments, and water is the most common mode of transmission—two factors that pretty much sum up the Pacific Northwest. As a result, Giardia is unusually prevalent in our area.

How Does a Pet Become Infected?

Whether your dog is swimming in a lake at a local park (where ducks also visit), lapping from a woodland stream during a hike (where deer may have passed through), or diving after a ball thrown into the water at an off-leash park (where another dog’s infected poop may not have been picked up), he or she is very likely to encounter Giardia.

And Giardia is not just an off-leash park issue: if you have a small water feature in your back yard, or leave a water dish outside for your dog, visiting raccoons can leave the parasite behind. If a stray cat poops in your yard and your dog thinks that was a special treat left just for him, the parasite can be transmitted.

Are Dogs the Only Ones Affected?

No. Giardia is found in dogs, cats, and most wild animals (e.g., ducks, geese, raccoons, squirrels). It can also be transmitted to humans (letting an affected dog lick your face), so it’s important that everyone in the family follow safety precautions.

What are the Symptoms of Giardia?

Giardia affects the digestive tract potentially causing loose stool, diarrhea, lack of appetite, and vomiting. Many dogs will show no signs of infection or distress whatsoever. In these cases, minor stool problems are often mistaken for “he must have gotten into something” or “I guess that new food we tried doesn’t agree with her.”

Without treatment, Giardia can cause serious gastric inflammation, chronic diarrhea, and weight loss due to inappetence and malabsorption.

How is Giardia Diagnosed?

Giardia is diagnosed by a fecal sample. Technicians look for both the cyst and for antibodies to giardia. Dogs can intermittently shed giardia cysts so looking for antibodies help guarantee a diagnosis.

Approximately 15% of the fecal samples we submit test positive for giardia. We recommend checking for intestinal parasites at your annual exam as well as if your four-legged family member is experience loose stool, diarrhea, or vomiting.

How is Giardia Treated?

Like so many parasitic infections these days, Giardia is becoming more and more resistant to treatment (which means more and more animals are carriers).

Treatment varies depending clinical signs and severity of infection, but usually involves 1 or 2 oral medications. It is important to pick up fecal material at this time in particular to help prevent contamination of the home environment and re-infection. It is also very important to bring a fecal sample in 3 weeks after finishing medication(s) to make sure the infection has cleared.

On your pet’s first and last day of treatment wear gloves and give your pet a bath, with special attention to the derriere, to eliminate all Giardia cysts from the fur.

Wash your pet’s toys (put the hard rubber ones in the dishwasher).

Disinfect hard surfaces with a dilute bleach solution (3/4 cup of bleach mixed with 1 gallon of water) or a disinfecting household cleaning product.

For added precaution, steam clean any upholstery and carpeting that your pet may have contacted.

Wherever possible, avoid all forms of water when away from home. Bring water (and a dish) to the park for your dog. When out hiking, clip one of these to your belt:

Add this link to the words “one of these” https://www.chewy.com/ethical-pet-handi-drink-instant/dp/56342

Wash your pet’s water dish regularly with soap and hot water… both the inside and the outside where they might have licked.
Wash your pet’s toys regularly.
Pick up your pet’s poop outside (both dogs and cats).
Avoid walking your pet where other animals (including wildlife) have pooped.
Get regular fecal checks for your pet: we recommend twice a year.

Font Resize
Contrast
Accessibility by WAH
Call Us Email Us