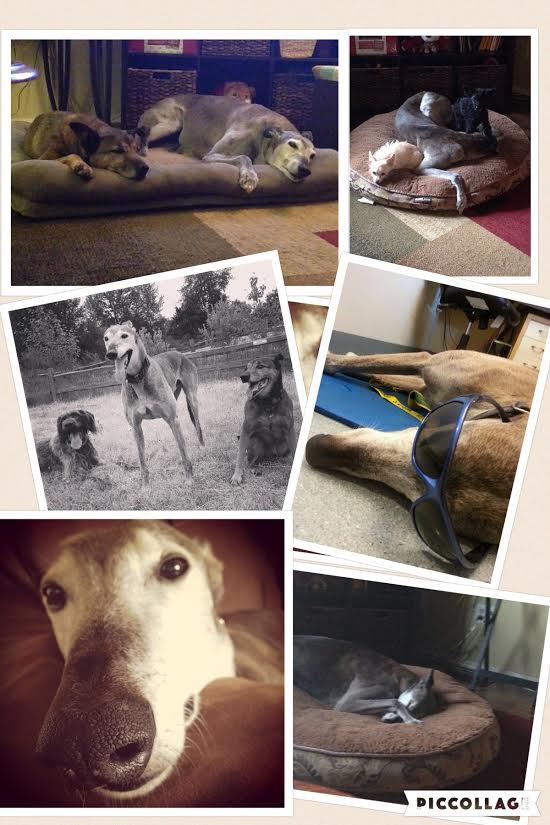 I recently lost my beloved 13 and a half year or greyhound, Hannibal. I had him for 12 years and while rationally I know that getting 12 years with a greyhound is a gift and almost unheard of, selfishly it still was not enough. Technically I adopted Hannibal from Washington State University. They had an agreement with a rescue organization to adopt greyhounds to WSU that were universal blood donors. WSU would then adopt the dogs out to community members and veterinary students. My friend was responsible for blood typing the dogs and bringing the universal donors back to Pullman. One fateful day I went with my friend to the “big city of Spokane” (when you live in Pullman, Spokane is huge) to get lunch, go shopping, and pick up a greyhound. When we entered the rescue the greyhounds were all outside playing. There were 15 dogs and only one caught my heart. I can remember him looking at me and something just clicked. I had a 1 in 15 chance of him being the one, and he was! Immediately I knew I would adopt him. I started the paperwork the moment I got back to Pullman and within a few days Hannibal was coming home with me.

Hannibal’s name was originally Mr. Dee. To be honest, I don’t think either of us really liked it. It just didn’t fit. Greyhounds often times wear basket muzzles when they are not kenneled due to their thin and easily injured skin. The rescue sent Mr. Dee’s with him and I would use it initially when I was not home since I wasn’t sure how he would be alone. I came home from school one day and walked in to my roommate saying, “You will not believe what he’s done”. Apparently the large walk up counter top was no match for Mr. Dee when brownies were involved. He had brownie smashed in and all over the basket muzzle. He was very pleased with himself. My husband had just forced me to watch Silence of the Lambs for the first time and I said “he looks like Hannibal”! We started laughing which made the greyhound excited and the name stuck. He was Hannibal from that day on.

Hannibal was amazing and I know, everyone’s dog is the best dog, but Hannibal truly was the best greyhound ever. He would come when called and didn’t need a leash, he would sit, he would shake, he was the vet school mascot at numerous events and would let kids lay on top of him, he protected my female kitty when she would go outside, he saved countless puppy lives by donating blood, he was the palpation demo dog as well as moral support mascot for first year anatomy class at WSU, just to name a few. Hannibal was my companion when I worked in tri-cities and my husband Nick was in veterinary school at WSU for three years. He was my rock, my snuggle buddy, my friend.

Greyhounds are not like other dogs, they live very sheltered lives and are not exposed to much when they are growing up. My favorite thing about Hannibal was watching him learn what being a dog was about. Slowly but surely he started wagging his tail, figured out how to play with our other dogs, realized digging was the greatest thing ever (much to Nick’s disapproval), and more. The day we were on a walk and he marked a bush for the first time was such a proud mommy moment. He was so proud of himself and if anyone heard me yelling encouragement to him as he peed they probably thought I was crazy. I didn’t care. My boy was becoming a man :0).

I miss Hannibal every day. I miss his tail wagging so hard it caused bruises on my legs, I miss his spin circles when I came home, I miss how he always ran outside in big circles (always in circles), I miss how he would stand over Jager (our other dog) until he moved when he wanted his pillow back, I miss how excited he got when he saw other greyhounds, and I miss his beautiful greyhound kisses.

Dealing with the loss of a four-legged family member is really hard. I have found that being able to share the journey you had with them can help with the grieving process. It lets you remember both the big life events as well as the little quirks they had that just made you smile. We are starting an ‘In Memoriam’ page on our website. Here we will post testimonials about your loved ones that have passed for a year. If you would like to participate, please email us your post (500 words or less please) and a picture if you like. We will only accept emailed photos. No original copies please.